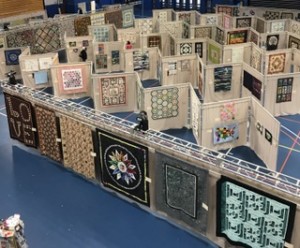 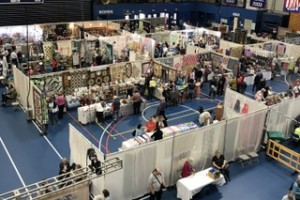 A World of Quilts Show was the impetus for the formation of the Northern Star Quilters’ Guild.  What started as a small show to raffle a quilt and raise money to support the local American Field Service has grown into a large event that helps promote the art of quilting.  A World of Quilts is held the first weekend in May of each year.  The show typically has on display  more than 400 quilts including about 200 registered quilts, a charity raffle quilt, invitational displays by nationally recognized quilters, and displays by our special interest groups (SIGs) as well as quilts made during the year as part of NSQG activities.  Additionally, there are 30+ vendors, demonstrations, and presentations by our keynote speaker.

A World of Quilts helps NSQG maintain its purpose of promoting interest in and encouraging participation in the art of quilting, while stimulating and coordinating the efforts and talents of individuals interested in quilting.  Proceeds from the raffle quilt support a chosen charity, other funds raised support the educational activities of NSQG that in turn help to keep the art of quilting flourishing.

The first two “A World of Quilts” shows (1980 and 1981) were small, fund raising events held at Somers Intermediate School; however, by the third show, it was growing and more space was needed. The guild approached Sr. Barbara, who was Principal of John F. Kennedy Catholic High School (now Kennedy Catholic High School), about using the school for this purpose. In 1981, “A World of Quilts” moved to its new home at JFK, where it remained for 34 years.

“A World of Quilts” continued to grow with an attendance of 3,300 in 1983.  Initially it was held in early to mid-April, but in its fifth year, 1984, the show date was moved to the first weekend in May – the weekend it has been held ever since.  The quilt show flourished even more with a peak attendance at the 1990 show of 3,602 that included 15 buses!

The arrangement with Kennedy hosting guild meetings and quilt shows continued until 2015.  In that year, “A World of Quilts” moved to its present home, the O’Neill Center, on the campus of Western Connecticut State University in Danbury, CT.  This new venue has allowed the show to display over 300 quilts and offer up to 30 vendors per year – all in one area.  All facets of quilting – traditional pieced and appliquéd quilts, art quilts, landscape quilts, contemporary quilts and quilts representative of the Modern quilt genre – can be found at our show.